Despite great increases in spending and numerous reforms, few school systems perform well. In most, large numbers of students, particularly those from poorer backgrounds, fail to acquire even the most basic skills.

The work of researchers and policymakers around the world has begun to shed light on what works to improve schools. This book is an attempt to draw those insights together. It centres on questions of how to make the system work. Understanding what makes a good mathematics lesson or, more broadly, how to improve teaching and learning in individual classrooms, is extremely important to improving education. But even more important is finding ways to deliver that good teaching and learning across an entire system; one that may contain hundreds of thousands of teachers working in tens of thousands of schools. How do you get every mathematics lesson to be a good mathematics lesson? How do you get every school to be a good school? 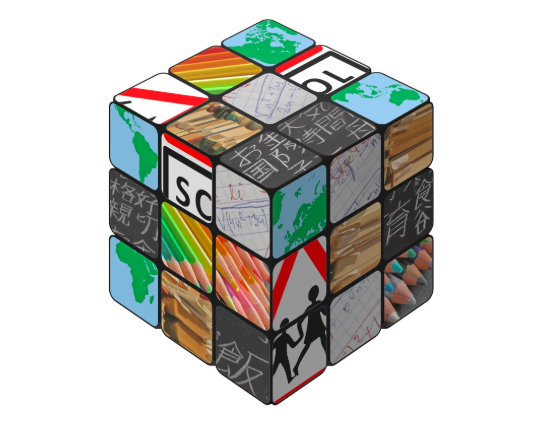 Perhaps the most exciting thing about education at the beginning of the 21st century, two and a half millennia after the establishment of the world’s first compulsory school systems, is that answers to those questions are beginning to emerge. New international assessments, improved data, and the ceaseless work of researchers and policymakers have produced a wealth of knowledge about what works and why. Sometimes that understanding is inaccessible to those who influence and make decisions about education policy – hidden in academic journals or obscured by a fog of political controversy and popular opinion – but it is emerging nonetheless. Out of that understanding, four things stand out.

The first thing we know is that just spending more money and employing more teachers does not help much. Luxembourg, Norway, and Iceland spend more on their schools than almost any other government in the world, yet they all perform below the developed-country average. South Korea, Finland, and New Zealand spend less than most other developed countries, yet they achieve some of the highest performance in the world. Developed countries with the smallest class sizes are often among the lowest performing, while those with the largest class sizes are sometimes among the best. They show that achieving good performance is not about how much money is spent or how many teachers are employed, but how well that money is spent and how well those teachers teach. 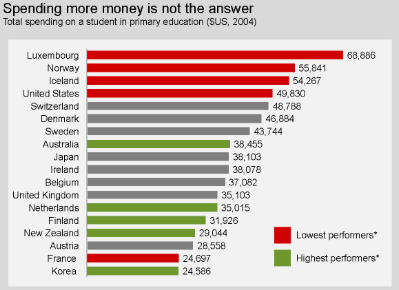 The second thing we know is that the key to transforming learning in schools is changing what happens inside classrooms. A child who starts school at age four and graduates at age 18 will spend roughly one million minutes at school. What they learn at school is essentially the sum of what they learn during each of those one million minutes. The research shows that how much they learn depends mainly on the teachers they are taught by and the schools which they attend. Students with the best teachers in the best schools learn at least three times more each year than students with the worst teachers in the worst schools. Unless reforms change and improve the detail of what happens inside schools and classrooms, they are unlikely to change outcomes.

The third thing we know is that most school systems have struggled to improve, but a few prove that substantial and sustained improvement over time is possible. In the United States, there has been almost no measurable improvement in the skills of students leaving school for the past four decades. One influential study showed that across a range of developed-world school systems, few had improved over a 25-year period and several had got worse. Yet some school systems have improved. Singapore moved from low levels of education at its independence in 1965 to some of the highest performance in the world. Several school districts, states, and provinces in the United States and Canada have achieved big improvements in outcomes over the past decade. Finland tops the world in educational achievement despite spending less on its schools than its neighbours. Together, those systems show that high performance and continuous improvement are possible. 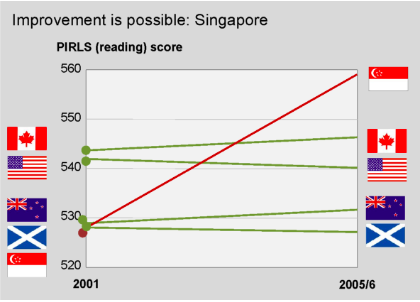 The fourth thing we know is how to do it. There are many things which a school system and the people who work in it need to get right in order to make sure that every child is able to learn. They need to ensure that school buildings are warm and welcoming, that school buses depart and arrive on time, that school meals are nutritious, that parents and community organizations are involved in schools, and that children are safe from harm during their time at school. However, when it comes to ensuring that children leave school with the values, skills, and knowledge they need to succeed, seven themes lie at the core of building a successful school system. They are:

This book explores each of the themes. It argues that the right policies combined with excellent delivery can make every school a great school, help every teacher to become an effective teacher, and ensure that all children receive the one million minutes of excellent schooling they deserve.

MORE INSIGHTS
Reports
Setting a New Pace: How Punjab, Pakistan achieved unprecedented improvements in public health outcomes
By Fenton Whelan & Will Anderson
|
Big wins for public health in Punjab, Pakistan.
Learn more
Reports
The Learning Challenge
By Fenton Whelan
|
Almost all of the world’s children are in school, but more than half are learning very little. For the first time in human history, we know..
Learn more
© 2022 Acasus. All Rights Reserved.
|
Privacy Policy